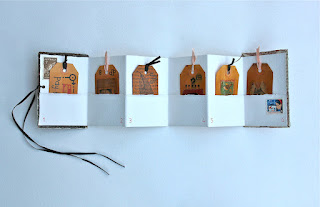 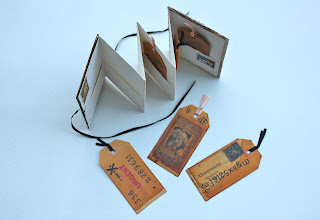 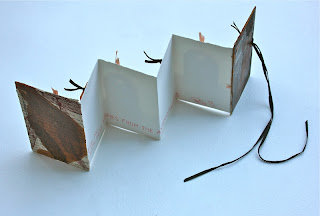 Herewith the little book I sent to  Jac
over in Lancashire UK
for my Pay It Forward contribution.

I was glad to hear it cheered her up after
a somewhat busy week.

Receiving little surprises in the mail
does have a marvelous tendency to
bring a small moment of happiness, doesn't it?
(as does sending a parcel to the other side of the world,
who knows if it will be well received and
where it goes on it's journey in between?).

Like a present,
the expectation of something tactile on it's way,
then the moment of arrival, before it's opened,
that anticipation of something being revealed,
not only the tactile object within the envelope but
also the giver's hopes and intent to gift a moment's pleasure.
Funny how that goodwill sticks to an object,
long after the act of giving has passed.

I have a few little gifts like this one
received in the post.
They still have the goodwill of the
sender/maker embedded within them.
They still warm my heart long after their arrival
and remind me of the generosity of others. 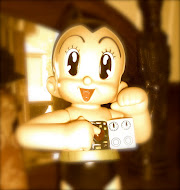